Posted on September 26, 2012 by Michael Carrier 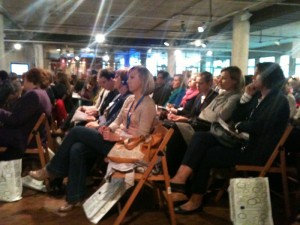 Every year September 26 comes around too quickly, and in the UK we neglect to join in the celebration of the European Day of Languages. A few events are arranged here and there but there is no press coverage or public awareness of the celebration of humankind’s ability to speak multiple languages and communicate between multiple cultures.

In Europe they do things differently, and I was lucky enough to share in celebrations in Poland yesterday with a conference in Warsaw focusing on New Technologies in Language teaching. Unlike an ELT or languages conference in the UK, this was of great interest to the press and the public – several TV channels were there interviewing speakers and participants, and the conference made it on to breakfast TV.

Can you imagine an IATEFL speaker being interviewed for BBC Breakfast Time? What does that tell us about our lack of interest in languages, I wonder?

The conference attracted speakers and participants from across Europe and was illuminating because the core theme of many of the presentations shifted from the use of technology in itself to the use of Social Media. Speaker after speaker described using Facebook, Twitter, LiveMocha, Busuu and other sites, and emphasised how the use of social media in and alongside the classroom was giving their students more confidence in expressing themselves, boosting their motivation, promoting task-based learning and groupwork.

It was instructive to see how the emphasis had shifted from the use of technology (web, PCs, mobiles) to the use of the communication medium facilitated by the technology, and how this can benefit learning.

Many of the investigations into social media usage had been part of EU projects, organised around EU-funded multinational consortia of schools and colleges from around the EU, with teachers and academics using the project to dig deeper into uses of social media.

The richness of this input gave a great ‘takeaway’ for this conference, but also served as a useful reminder that too few institutions in the UK are involved in the EU project circles that help teachers to carry out this vital developmental research. We in the UK really need to get more involved in the EU’s focus on language use and language research.